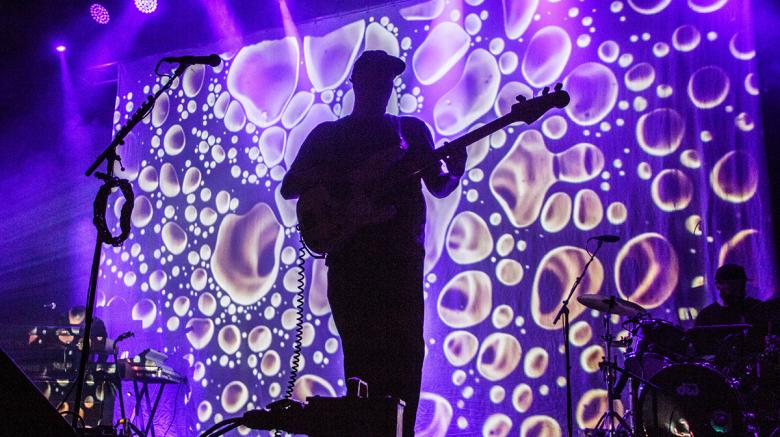 "Portugal. The Man wants to help quash the stigma around mental health"

The Portland band's members draw on their own lived experiences when talking about their concert series to support Keep Oregon Well.

Portugal. The Man has lent its name to a lot of causes: raising more than $1 million for school musical instruments, supporting climate change advocacy, even handing over all the profits from a planned Charlottesville, Va., show to the city’s community foundation in the wake of the white supremacist rally.

But the band’s most recent campaign supporting mental health awareness and destigmatization seems to resonate a little closer to home.

“We are 100 percent not the poster child for superb mental health,” said Zach Carothers, eyes wide and slowly shaking his head. Carothers, the band’s co-founder and bassist, is speaking in advance of the first of four shows to support Keep Oregon Well, a campaign to end the stigma around mental and behavioral health issues and encourage people to take care of themselves.

Carothers and Kyle O’Quin, the band’s keyboardist, sat down with Street Roots ahead of their first concert in the series at McMenamins Edgefield on Aug. 24. The band also features lead singer John Gourley, along with Zoe Manville, Eric Howk and Jason Sechrist. The concerts wrap up Friday, Aug. 31 in Bend.

“We’re letting people know: We’re with you! We’re one of you! Everybody’s got something, and we have to look out for each other,” Carothers said.

That mutual care has become even more important now with the band’s heightened success over the past year. Portugal. The Man has been together for 14 years, producing eight albums, but its celebrity status skyrocketed with the success of the chart-topping single “Feel it Still” from their 2017 album Woodstock.

Now the Portland-based group is a headlining Grammy winner, with endless tour dates and the stress and pressure of mainstream expectations. But they’re not complaining – far from it. They enjoy using their platform to call out organizations and efforts they support.

A lot of celebrities lend their name and money to causes as a matter of charity, but that’s not what this is about, Carothers said. This is personal.

“We’re saying we’re not doing well in this situation either, and we’d like to just help provide some tools, or just point somebody in a good direction to get some help if they need. Or if they know anybody that does.”

Within the band, Portugal’s lead singer, Gourley, has been open about his own social anxiety and episodes of stage fright.

To deal with the stress of the work and the tours, O’Quin said he needs his own private time to recover.

“We live in such tight quarters,” O’Quin said. “It’s interesting to see how people deal with stress and missing their family. Everybody is so different.”

Carothers recalls his youth, growing up in Wasilla, Alaska, where the dark days can trigger depression and isolation.

“During the winter, the sun comes up at 10:30 and goes down at 3,” he said. “It’s dark up there. There’s a very high suicide rate, and I saw a lot of my friends go growing up. And that was very hard.

“I see that everywhere we go,” Carothers said. “And everybody knows people, and everyone has problems themselves, and I think it’s just starting to get a little more socially acceptable to talk about it, to admit that you’re not all right, and to take care of yourself. And that’s one of the reasons I wanted to get into this, not only to spread the word for everybody else, but to remind ourselves to take care of ourselves, because normally, we don’t.”

“I always tell Zach I’ve hit rock bottom,” O’Quin said, “but it’s all right because there’s only one way to go.”

“Yep,” Carothers said. “You’re on solid ground down there.”

Carothers said the band was inspired to get involved with Keep Oregon Well because of its co-founder, Portland musician Logan Lynn, who himself survived a suicide attempt. Lynn launched the program in 2015, in conjunction with the Trillium Group and Mental Health Matters.

“He’s just a guy we know and love,” Carothers said. “He talked to us, and we loved his vibe and loved what he’s doing. Honestly, it’s an issue that we see every day, which is not like a lot of the other issues that we stand for. We obviously care about musical programs in public schools, but we don’t hang out in public schools too often. This is something that we see on the streets, and honestly, something we see very severely in our own group quite often, especially with a lot of musicians. That’s why we wanted to get into it.”

Keep Oregon Well promotes ways people can reduce the stigma around mental health and become an advocate for themselves and others.

Nearly one in five U.S. adults lives with a mental illness – 44.7 million in 2016, according to the National Institute of Mental Health. And the population with the highest prevalence of any mental illness would apply to a large swathe of Portugal. The Man’s audience – young adults ages 18-25, according to NIMH.

According to a June report from the Centers for Disease Control and Prevention, the suicide rate in the United States has risen nearly 30 percent since 1999, with mental health conditions among several contributing factors. In Oregon, suicide rates have been steadily increasing, and today the state is ranked 28th in the nation, with 21 suicides occurring among every 100,000 people in 2016.

By NIMH’s statistics, only a fraction of the people who identify as having a mental health issue actually seek help or treatment. The goal with Keep Oregon Well is to make sure people who need help feel supported in seeking it.

“You don’t have to say it loud and proud if you don’t want to,” Carothers said. “If you want to keep it to yourself, you can. But if you want help, you can find your own ways, and we’re all about people finding their own ways to make them happier and healthier.”

The band’s online video for “Feel It Still” created some controversy upon its release, notably for showing a Sikh man burning a newspaper labeled “Infowars,” the white nationalist platform run by discredited conspiracy theorist Alex Jones. The musicians received death threats from Jones’ supporters. But the otherwise benign video also includes Easter eggs for people who click on the links, with affirming messages for people to engage with organizations and causes, including Planned Parenthood, the American Civil Liberties Union, clean drinking water and pay equity.

O’Quin said the video still stands on its own as entertainment, but the charity information gives viewers another opportunity to learn about reputable organizations.

“We sussed out a lot of different charities,” O’Quin said. “Sometimes you want to give to a good thing, and you don’t even know where to do it. That’s crazy to me.”

Carothers recommends trusting your gut – in just about all matters.

“America in general is out of its goddamn mind,” Carothers said. “Trust your gut with almost everything. I don’t like politics. I don’t like laws. I don’t like beings that have to enforce those things. Most people know what’s right and wrong, what feels good, what feels bad. Try to make decisions that make you feel good, and do whatever you need to do to make yourself happy. And most of the time, those are good things that don’t hurt anyone else or hurt their feelings. Most of the time.”