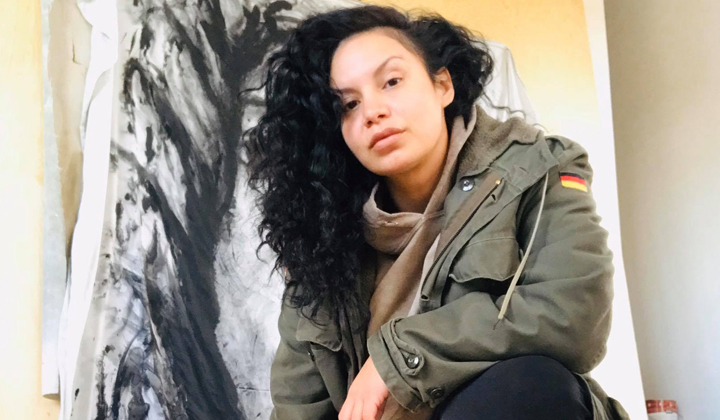 A citizen of the Sac and Fox Nation of Oklahoma (People of the Red and Yellow Earth), April also has heritage to the Tonkawa and Wichita people. April is a mixed media installation artist, community organizer, and advocate for Indigenous Womxn. She is a founding member of The Humble art collective of Santa Fe, New Mexico, which worked to create accessible and diverse art environments to the community and empower emerging artists. She was an educator in the arts department at the Sinte Gleska University in 2011 on the Rosebud Indian Reservation. April’s commitment to her Tribe and community lead her to become the Tribal Princess and Ambassador for the Sac and Fox Nation in 2004.

April invests her creative talents into different  organizations to help provide pathways of dialogue, healing, and strength. She is a creative contributor to Thrive Unltd. as well as member of The Three Sister Collective of Santa Fe, New Mexico. April utilizes her art to create visibility for Native Womxn, and bring awareness to the issues Native Womxn face, such as domestic violence, and missing and murdered indigenous Womxn, girls, trans people, and two spirits.

April is currently the artist in residence at Ute Mountain Studios. She is creating a body of work that illustrates the spectrum of Female Indigenous Identity. She incorporates recycled materials as a way of being environmentally considerate to the creative process, as a metaphor for how Indigenous Womxn are healing in learning different roles in life. Her work is a tribute to the leadership, perseverance, and power that Indigenous Womxn create in the world through Sisterhood, Motherhood, and community.